Electrical power produced from nuclear reactors is a common method of power generation in modern society and is widely used throughout the world.

The technology behind nuclear power splits atoms from specific elements and generates power by the energy released. The science of radiation technology dates back to 1895 but the most advances were made between 1939-1945. In these years the technology was developed during World War II for use in bombs. A decade later the research was repurposed for the practical use of nuclear fission. This gave rise to nuclear power generation.

Nuclear facility stakeholders should be asking the question “Do we have the time and money to deploy robotics?”.

In recent years there’s been new challenges in the world of power generation that’s produced a new trend. Nuclear power is being phased out around the world with more nuclear reactors being decommissioned than being opened.

For years to come, nuclear facility decommissioning will be a monumental task that requires sizeable effort and skill. To date, there are approximately 450 nuclear power plants online worldwide. Of these several hundred plants, over 50% of these reactor facilities are nearing or are at the end of their operational lifetime. This means critical decisions will be made as to their future.

Additionally, there will be environmental concerns for each site involved in nuclear research, milling/uranium milling and refining of raw radioactive materials. Within these hazardous site environments; remediation will be necessary. Planning for your Underwater Nuclear Project

When scoping your in-water nuclear project time, costs and schedule of tasks, it’s essential you evaluate the available underwater techniques most appropriate for your project. Below we’ve outlined several in-water approaches that can be considered for your nuclear project.

Underwater robotics (AKA underwater robots) is a technology originally used for oceanographic research, inspection, and performing limited and task-specific operations while being controlled by a top-side operator. The two most common types of underwater robotics are Remotely Operated Vehicles (ROV) and Unmanned Autonomous Vehicle (UAV).

ROV’s are unmanned underwater robots that are remotely controlled by top-side pilot. Typically, they’re used for exploration and inspection tasks. They may also include lights, video camera, onboard sonar and sometimes an articulating arm.

A machine that can maneuver in an in-water environment autonomously without human interaction.

What’s the Difference Between an AUV and ROV?

An AUV works independently without connecting cables, where ROV’s are physically connected via cabling to a remote operator (pilot).

What are Nuclear Divers? 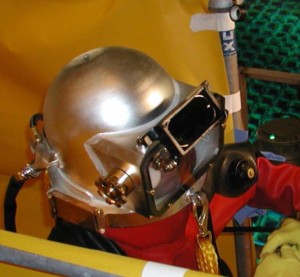 Since water is essential for nuclear facilities, acting as a barrier for radiation and to provide cooling, there’s a high demand for underwater work. Disposition of the work nearby, while using the existing radiation shielding capability of the water itself, leads to extensive advantages over limited task ROV’s or moreover, work in the dry.

Nuclear divers are expert commercial divers that support nuclear power operations. Typically, they work on-site throughout the year performing inspections, preventative maintenance, ongoing general maintenance and emergent problems, but can also be utilized in decommissioning within the spent fuel pools for many efficient and economical tasks.

Philip McDermott, UCC’s Vice President of Nuclear Services, states, “As UCC progresses through our 50th year, we are proud to offer these unique decommissioning services where we fill a niche role in delivering extensive cost and radiation exposure savings to customers who require underwater solutions whereas perhaps ROV’s have run their course”.

UCC is a leading commercial diving company dedicated to advancing technology for the Nuclear Power Industry.